The event was held at the University of York and the full title of this one day conference was: White Rose University Collaboration Project Summer School “Innovating the Future of Bio-Inspired Autonomous Robots for Offshore Renewable Energy Inspection”

The morning began with introductions from the organiser, Dr. Mark Post, with Professor Paul Mitchell chairing the rapid fire presentations.  The presentations were varied, and covered a wide range of topics such as undersea battery storage, evolutionary algorithms, computational fluid dynamics, autonomous vehicle tracking, two fish like robots that swim, a commercial sea robot and a couple of presentations on different aspects of underwater acoustic communications, how to get funding for offshore reusable energy projects and of course Pipebots. It was interesting to see Kirill give his presentation on Pipebots and I was very pleased to see the Joeys take centre stage.

After lunch, we saw 3 systems being demonstrated in a lake that was close to the venue. These demos took a while to set up but fortunately the rain that was forecast for the afternoon was replaced by brilliant sunshine and it gave me a chance to have in depth chats with the people doing the demonstrations.

The first demonstration was an acoustic underwater communication network using multiple nodes that is being developed at York . We couldn’t see much apart from 5 yellow buoys holding the nodes at a set depth and the laptop screen with some bar charts showing the quality of the signal. However, the technology that has gone into this project will have many uses for underwater robotics. 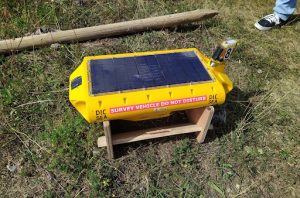 The next demo was the commercial robot from PicSea (https://www.picsea.co.uk/).  This robot is intended to be dropped off at a location and maintain a set position using GPS when on the surface. The autonomous underwater vehicle (AUV) has solar cells on the top to charge the batteries and can perform a range of different dive missions.  The version we saw was only fitted with a camera and a sonar but other instruments can be fitted as required. 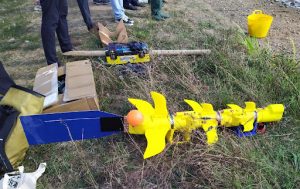 The third demo was of Robo-Fish, a bio-inspired robot that uses the big blue tail fin for propulsion and the other segments with smaller fins for steering.  As with all live demos, many things can go wrong, and this was no exception with the tail segment of the fish refusing to boot.  This was tracked down to a seal that had worked loose and had filled the last segment with water but it could not be fixed by the lakeside.

After the demos, we were taken on a tour of the new purpose-built home for the Institute of Safe Autonomy (https://www.york.ac.uk/safe-autonomy/).  The building doesn’t give much away from the outside but inside it has everything that a bunch of roboticists could ever need.  I was especially envious of the basketball sized indoor drone area complete with a first floor control room to manage operations from.

One of the great things about meeting in person is the opportunity to learn from other robotics experts.  Many of the challenges that were faced by the developers of the robots shown at the summer school were the same or very similar to the challenges that we have experienced whilst building Sprintbot and the Joeys.  All in all, a good and worthwhile day out.